‘Futureland’ and a co-worker’s racism harsh my Obama high 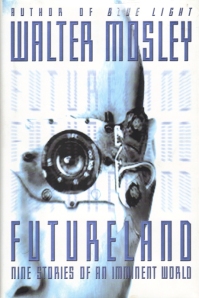 Yesterday, watching Obama take control of the mess into which the executive branch had fallen, was a good day. In the evening, I told Andrew I believe we’ve done much more than we realize to eliminate racism in this country, or at least make it so socially odious that it might as well not exist.

Today, however, was a pessimistic day as my idealism was smashed. In the cubicle next door, I heard a co-worker raving about an encounter with a client he labeled “a damned Arab.”

“They’re all terrorists. Even the children… You can’t trust any of them. I don’t know why they have to call me, talking all Arab. We should blow them all up,” he said.

I am sheltered. I normally associate with people of extreme education, raised in a strict environment of social correctness. This co-worker’s words were alien and loathsome. There was nothing in them to which I could connect on any level.

The fever of the inauguration had given me a temporary peace. But my co-worker’s words jogged me into a blacker vision for our nation’s future, one that’s been reinforced in the last week while reading an excellent science fiction work by Walter Mosley, titled Futureland: Nine Stories of an Imminent World.

This dystopia is no Idiocracy; it’s a world of corrupt geniuses and the helpless victims pulled into their sphere of influence. Futureland is a place of designer brain-viruses, corporate city-states and megalomaniacal dictators, genetically-engineered slaves, and politically oppressed masses.

It’s a place where children are drafted into government cabals; where the race and gender divides have exploded; where the Supreme Court allows citizenry to be revoked from anyone the authorities deem socially dangerous; where property rights have been all but abolished; where pre-teens live in underground concentration camp castes while the rich cavorte in the streets above; and where science and religion have been merged into one InfoChurch to keep the desperate under thumb.

Some days Mosley’s futurescape seems laughable. Others — when a co-worker reveals such ill-masked, torturous hate — his grim vision seems as imminent as the vignets he ties together in this book. And then I wonder whether we’ve really progressed at all as a nation, or whether we’ve simply deluded ourselves into thinking our attitudes are evolving at all.

Read This: The Forever Formula

FROM JASON’S RECENT AMAZON ORDER — Extending the human lifespan sounds like a great achievement, right? A friend of ours recently linked to an Atlanta Journal-Constitution article about Resveratrol, a drug that significantly prolongs life and eases old-age ailments.

The write-up also hinted that pharmaceutical researchers are on the cusp — as early as two generations away — from making drugs that will push the average life expectancy to 100, or maybe 120, or even higher.

I was immediately reminded of a book titled The Forever Formula, written in 1979 by Frank Bonham. I had to read it again, and Amazon shipped me a copy. Typically labelled juvenile fiction, you could easily breeze through it in four hours.

The novel is set in 2164 and is seen mostly through the eyes of 17-year-old Evan Clark, brought forward in time from 1984 through suspended animation. When he wakes, he learns his father created a drug called Rejuvenal that allows people to live to 250 years old.

But the Rejuvenal treatments have exacted a horrible toll. Most other nations have banned the drug, but the United States gave rise to a Senior Party controlled by the superannuated. The birth rate has fallen, the elderly have stripped most young people of habeas corpus, and the oldest are dying of terminal boredom — a mysterious geriatric disease called the Logardo epidemic.

In a world where 80 is the new 21, overpopulation is a cancer that eats away at the young. Only the truly elderly are allowed to live under plastic domes and breathe purified air. They have the best food. They play croquet, attend eternal gin parties, squabble with their equally old neighbors.

And worst of all, Rejuvenal has warped their bodies, draining skin of its firmness and color. It leaves users with gelatinous, see-through skin stretched over clearly-visible muscle and sinew. The side-effect is called Guppyism.

Meanwhile, with the elderly sapping the best resources, the young live in the moldering wrecks of cities, their air drained of oxygen because ocean plankton are all but extinct. Roaches and rats overrun everything outside the domes and voraciously attack people. Impoverished vendors sell oxygen on the streets and the government has planted miles of cloned tree farms.

In real life, the idea of overpopulation is a ludicrous one because there is so much landmass in the world completely uninhabited. Right now, more than half of the U.S. population lives within 50 miles of the East or West coasts.

But as Scott Rubin of Geeknights is so fond of pointing out, the problem isn’t so much overcrowding as it is a) finding ways to distribute food from rural farms to urban population centers, and b) dealing with the byproducts of those centers.

The US is growing at a faster rate than any other industrialized nation. The country has swelled by about 100 million people in the past 41 years and US census experts estimated that the population hit 300 million in October 2006. If it continues to accelerate at a steady rate, it will top 400 million sometime around 2040.

But let’s say the average lifespan did, as Bonham worries, go from 75 to 250 years. Those numbers would exceed the already-burdened curve we have now between supply of essentials and demand for the same. Things get even worse in The Forever Formula when Evan learns the American president, Charlie Fallon, wants to scan his brain for the recipe of another drug Evan’s father was working on — one that would make Man immortal.

A group called the Juvenile Underground decides that such a formula would mean Seniors would establish a permanent slave underclass among the young and consume all the country’s remaining resources. They help Evan escape his hospital cell and go on the run.

I won’t spoil the ending for you, other than to say it comes close to being great, except for a deus ex machina that leads to a (for some) happy ending. It’s all a little too convenient, and manages to candy-coat some pretty grisly deaths. I think Bonham would have been better served penning the last few chapters bluntly and bloodily.