Even when I watch TV, I’m not watching TV

FROM JASON’S DESK, NOT HIS COUCH — I don’t watch television anymore, although I do watch an awful lot of television shows.

Apparently, television has never been more popular. Nielsen Media Research said in February that the average American watches 151 hours each month — up from 145 hours during the same span last year.

And as electronics become cheaper and the technology curve continues its exponential spike, televisions continue to fly off the shelves. There are an estimated two billion sets worldwide. In the United States, more than half of all homes now have three or more, with the average of all homes at 2.86, Nielsen’s Television Audience Report concluded. Two decades ago (1990), the average was just two television sets per home.

Now, Nielsen says as of July, there are actually more televisions in the States than there are people. (The nation’s population is estimated at 304 million.) 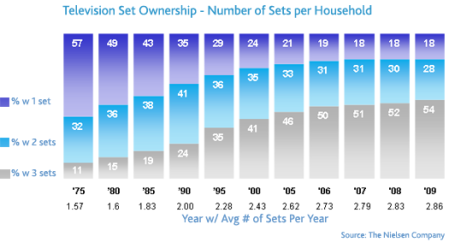 I certainly have contributed to the jump. Not only do I have the 42-inch plasma in my living room, but I’ve got the 36-inch set in my bedroom, the 38-inch box in my den, and a 19-incher on the kitchen counter.

The truth is that I watch none of them. My television viewing is done online these days — and so by all rights it should be called webivision viewing. Corporate sites like Hulu, YouTube, and [AdultSwim], combined with the greymarket of TV Links and QuickSilverScreen, have supplanted the need for a crude television set.

The results have been disastrous, serving only to further erode my limited attention span. I used to slump in front of the tube and keep my eyes glued to it… now I can hardly watch five minutes without opening new tabs, checking mail, catching up on a forum argument, catching a quick webcomic, or browsing my Google Reader subscriptions. It makes for a much more franetic, less-informed, even cheapened viewing experience.

Widespread availability of show content doesn’t help, either. It used to be that I had to wait from week to week to get the next episode of Star Trek: The Next Generation, Boston Legal, Arrested Development, or what have you. That built in the element of delayed gratification: distance makes the heart grow fonder, and all that. Now I can hit Hulu and be watching any or all episodes of Dead Like Me or Sliders inside 20 seconds. It’s like celebrating Christmas everyday; it sounds great, but after a while, the presents just aren’t special anymore.

And that means I’m less likely to watch and appreciate all of any given show. There is far more Grade-A content out there to watch now than I can ever consume, which means I’m not obligated to stick with the cream of the crop through to completion and I can float on to the next pilot or premise that catches my wafting interest. That’s why I’ve only made it through the first three episodes of Spaced since Hulu posted the first and second seasons last week.

There’s no pressure to get those episodes while the getting’s good.

Meanwhile, my big plasma upstairs is being slowly tortured. It’s stuck by wifely command on HGTV for hours at a time, with breaks for Live with Regis and Kelly, The Bonnie Hunt Show, or any fashion/cooking reality show aired by Bravo. That poor television must be begging for the sweet release of death.

I honestly can’t remember the last movie I watched on that blessed set. It was probably Transformers: The Movie from 1984 (the animated one). If it weren’t for the wife, the plasma would be hooked up to my computer. Were I a betting man, I’d say it’s only a matter of time before all televisions are just Net receptors, and that traditional, passive cable or satellite are going the way of the dinosaur.

That is, if the companies that control media can get their noses out of their proverbial asses and get in touch with the inevitable realities of our shifting culture.

Wallpaper of the Week: Kurt Vonnegut, or Slaughterhouse-4scrape

FROM JASON’S IMMEASURABLE GRIEF — It’s true. That fool’s paradise of visual filth, flamboyance, and foolery known as 4scrape is no more. It’s just another 404 now.

When it comes to image boards, as we’ve said before, 4scrape was the best way to scan for new desktop art. It not only cut out everything but the wallpapers themselves, but it also reduced the need to click through hundreds of links and page loads.

On July 27, the creator’s blog said the site is down and he/she won’t cast rez on it. The source code and SQL were posted, though, so the entire engine is open to the public for any willing to continue the good fight. There might even be a torrent release of the 150GB of image data cached by 4scrape (though that kind of a download is impractical at best and retarded at worst).

It didn’t take Ice-9, a prison riot, a Martian invasion force, a timequake, or nuclear holocaust to bring down 4scrape. Apparently, there were too many problems with the code to put more blood, sweat, and tears into it:

Right before the site folded, I had been searching almost in vain for Kurt Vonnegut wallpapers to share. The top-most one was easy to find; but when I went looking for others — well, that’s when the 404 struck. The subsequent announcement that the site will be abandoned put me in a particularly grouchy and very Vonnegut-story-defeatest mood. I stomped around a bit, and then figured the universe will manage to realign this mistake somehow.

Truth is, even with 4scrape’s help, Vonnegut ‘papers are awfully rare. I turned to customized Google Images searches. They turned up very little. The best I could find, aside from a few badly-patched-together and quite ugly photo mosaics were oversized scans of some of book book illustrations and one fairly large but grainly photo that didn’t make Kurt’s face look like a catcher’s mit.

Some Photoshop filters, sharpening, and color-tweaking later and here are some (moderately) presentable pieces of Vonnegut-icana to ease us all through the rough patches.

We’re on the Encyclopedia Dramatica

I recently noticed that a few errant hits to Quaedam (pronounced ka-DAMN!) came from the “encyclopedia” entry over there. Following the link, I found that I was quoted as saying…

The obvious benefit is that it allows you to skip over the retardation, racism, sexism, abuse, degeneracy, neo-Nazism, and spam that populates those types of boards. All you want to see are the images, and that’s exactly what 4scrape gives you.

…Which is true, and came from a post a couple of weeks ago. And I’m okay with being a Lol fag.

First we storm the sarcasticly-written wikis, and then the world!

FROM JASON’S DESKTOP — If you’re an adult, and you’re looking for desktop wallpaper in any other way than 4scrape, then you are doing it wrong.

That’s because whoever recently updated the site is a god-damned genius.

4scrape has an engine that will load random wallpapers scooped off image boards like 4chan and archived. It used to be that you could load a handful of these random images, look them over, and refresh the page to see another bunch.

The obvious benefit is that it allows you to skip over the retardation, racism, sexism, abuse, degeneracy, neo-Nazism, and spam that populates those types of boards. All you want to see are the images, and that’s exactly what 4scrape gives you.

But now, 4scrape has gone one step better: You don’t even have to refresh the page anymore. Instead, you can load it up and scroll down, and the scripting will keep loading a never-ending stream of uninterrupted wallpaper goodness. No back button. No waiting to refresh. No interruptions.

For desktop-o-philes like me, this is visual crack. I scrolled for 45 minutes last night and saved 23 amazing new background images, including classical paintings, landscapes, futurist concept renderings, and one showing the Hulk going apeshit on Wolverine.

If you’re a prude (and the reason that I stipulated in the first paragraph that you must be an adult), then brace yourself for pornography. You will get boobies and varies body cavities as you keep scrolling through the wallpapers.

But if you’re relatively enlightened (read: grown up and not shackled by a religiously-compelled inability to practice discernment), then you should have no problem. You be set loose in a veritable Wonka’s chocolate factory of colorful art.

This is what the Web should be. This is how smart all content providers should aspire to become.

Of course, if you’re not just browsing (I almost always am), you can always go to 4scrape’s main page and use the search field to hunt for something specific.

FROM JASON AND ANDREW’S INVENTORY — We decided that a co-op dungeon crawler was in order, but had quite the time settling on a title. Neither of us really cared about World of Warcraft when we tried it, but we are both jonesing for the release of Diablo III.

So in picking over a mind-blowingly inclusive list of MMORPGs out there (free to play, but most with in-game options to purchase upgrades), we chose Red Stone:

I was hoping for something that would tax my new NVIDIA 9800GT a little more, but once in-game I found that so far the 2D gameplay is not only fun, but has the potential to be quite addicting.

Of course, we have friends who are ardently pitted against point-and-click rogue-style games because they require little skill; I love the exploration and the constant search for upgrades. I love leveling. I love my JRPGs. I love getting new abilities and skills, new combos, and new equipment.

Anyway, there will probably be a forthcoming review.

Until then, you can have some art. I hunted around and realized there were no Red Stone dock icons anywhere to be found (at least not in a 15-minute Google search), so I had to make one for my Rocket Dock bar.

While I was at it, I slipped the simple Photoshop style onto a few other pieces of Red Stone art. Total creation time: 12 minutes. Download them all by clicking here.

FINALLY ESCAPING ANDREW’S FREE TIME — This isn’t going to be a super-massive post, but I found these awesome pictures that someone shopped earlier this year. He took several different video game sprites and integrated them with real photos giving a surprisingly interesting effect. Credit to RETROnoob for some awesome artwork. Follow the link for more photos as well as higher-resolution images.
SPACE

Phoenix, the Mars probe, has Andrew bouncing off some walls. I briefly considered pulling back the camera another few orders of magnitude to show him devouring the earth like Galactus.

Quaedam
Create a free website or blog at WordPress.com.